One of the most distinctive features of Valencia are its colorful streets, something that for more than a century has been achieved thanks to the Nolla mosaic, a great unknown to many people. 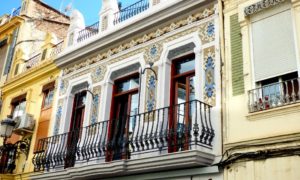 Nolla ceramics was born in the 19th century, in the Valencian town of Meliana. A project led by Miguel Nolla, who, inspired by the English ceramic mosaics of high performance, proposes to introduce a similar product in Spain at more affordable prices.

In order to manufacture the product he wanted, Miguel Nolla needed a certain infrastructure and facilities, and he found them in a piece of land in Meliana, which also had an imposing building that later became the first full-scale showroom in Spanish history.

The massive silhouette of the factory complex, as well as the towers that flanked it, made it known as “The Castle”. Today, despite the deterioration caused by the passage of time, its massive structure continues to impress those who contemplate it.

What at first could be considered as an adaptation of the English model, soon became a symbol of good taste and purchasing power in the society of the late 19th century thanks to the properties of the material, such as hardness, durability, color and versatility. Owning a Nolla mosaic was a privilege, and it still is!

The great versatility of Nolla ceramics meant that it was applied to a wide variety of uses, the most predominant being the “solar” style, which corresponds to compositions that covered the floor like a carpet, with different and unique designs. The quality of the tesserae, as well as the good work of the mosaicist, have ensured that for more than a century these designs have preserved their original state in many of the buildings in which they are implanted. 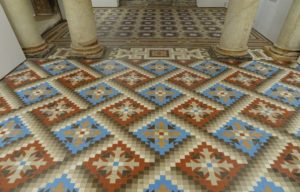 The popularity of the Nolla mosaic, in Spain and all over the world (we can find this ceramic in countries such as France, Russia, Austria, Cuba, Argentina…), is due not only to the quality of its material, but also to the art that this ceramic allows to build.

The geometric pieces and the varied colors of the tesserae (black, brown, gray, beige, orange, red, blue and white) make the designer’s imagination the only limit. 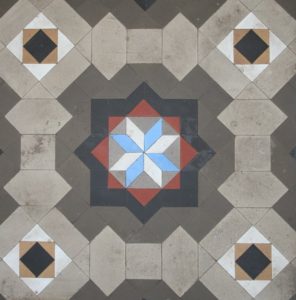 In Valencia we can find these unique designs achieved with the Nolla mosaic in places like the “Asilo de San Juan Bautista”, “el Ayuntamiento de Valencia”, “la Casa de Correos”, “el Mercado Central”, hundreds of bourgeois houses of the time and many other places where perhaps its existence is still unknown. When we say that in the streets of Valencia you can breathe art, it’s for a reason!

However, and despite its existence in our streets for over a century, there are still many Valencians for whom the Nolla ceramic is a real unknown and even more its history, tradition and art. Therefore, if you ever have the pleasure of walking by buildings with Nolla mosaic facades or have it under your feet, enjoy it, contemplate it and photograph it!

In short, the lack of knowledge of part of the population towards the Nolla mosaic and its great relevance make the enhancement of this heritage and its professionals the objectives of some of the projects activated from València World Design Capital 2022 in collaboration with the study ARAE Heritage that will soon be made public. Projects both didactic and recovery of memory that will take place in the coming months.