We tell you where some of the artistic interventions that are changing the landscape of the city of Valencia are.

Urban artists are living a golden age all over the world, and in Valencia especially. Luckily, you no longer have to get lost in the alleys to find one of their pieces, but they appear in the busiest places and on a large scale. Here you have a collection of some of the works (because they are not all murals) that serve as a background for the day-to-day life of the Valencians.

These two dividing walls have already become an essential part of the postcard of the Plaza del Tossal. Two large urban art murals by two different artists blend in perfectly with the character of this square, where visitors mix with locals and bars with a tradition of exotic takeaway food.

As if following this spirit of mixture, a party wall was reserved for each artist: on the left we have Escif’s car that falls, or flies, which we will go into a little further on, and on the right we find that great snake beard of the Italian artist Blu, who has left several of those murals in Valencia that are now regular companions of the neighbours. If you continue walking through the Barrio del Carmen, you can easily find some of them. 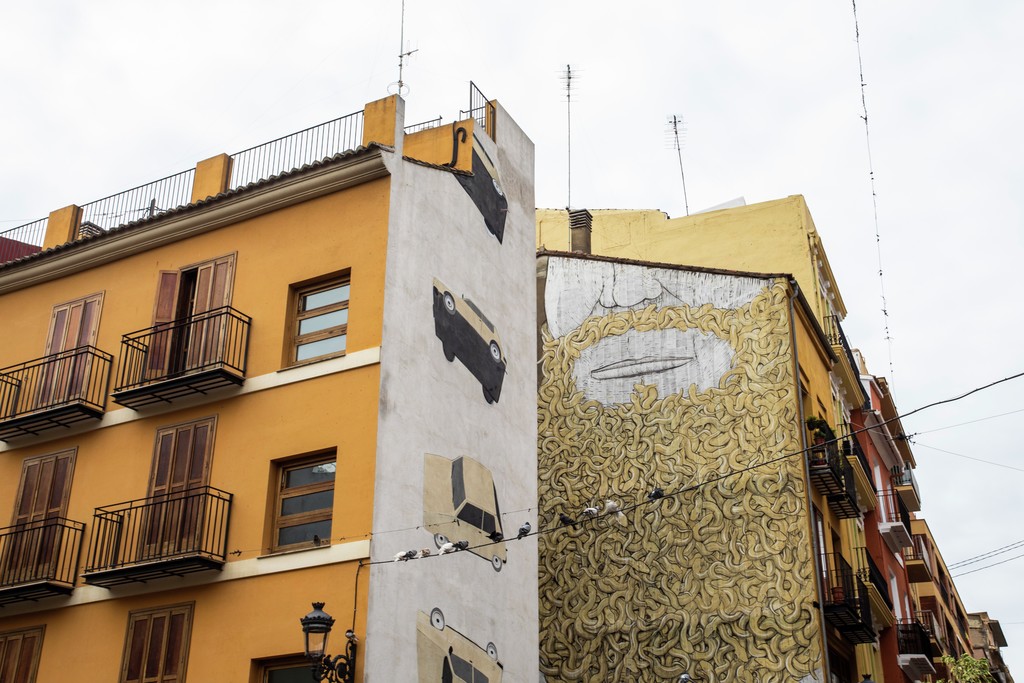 If street art is already more than welcome in museums all over the world, in Valencia it was taken a step further and given a more than privileged place on a permanent basis: the great back of the Valencian Institute of Modern Art (IVAM). The person in charge of decorating this giant wall was Escif, one of Valencia’s most important urban artists, both locally and internationally. In his intervention, elements such as busts in the classical style are mixed with graffiti that imitate the hooligan signatures that we find on the walls of any neighbourhood, but in this case they are messages that already existed on the walls of the El Carmen neighbourhood.

We recommend you to sit on one of the benches in this park with a minimalist design that accompanies the museum and discover all the messages that Escif spread on the large canvas at the back of the IVAM. 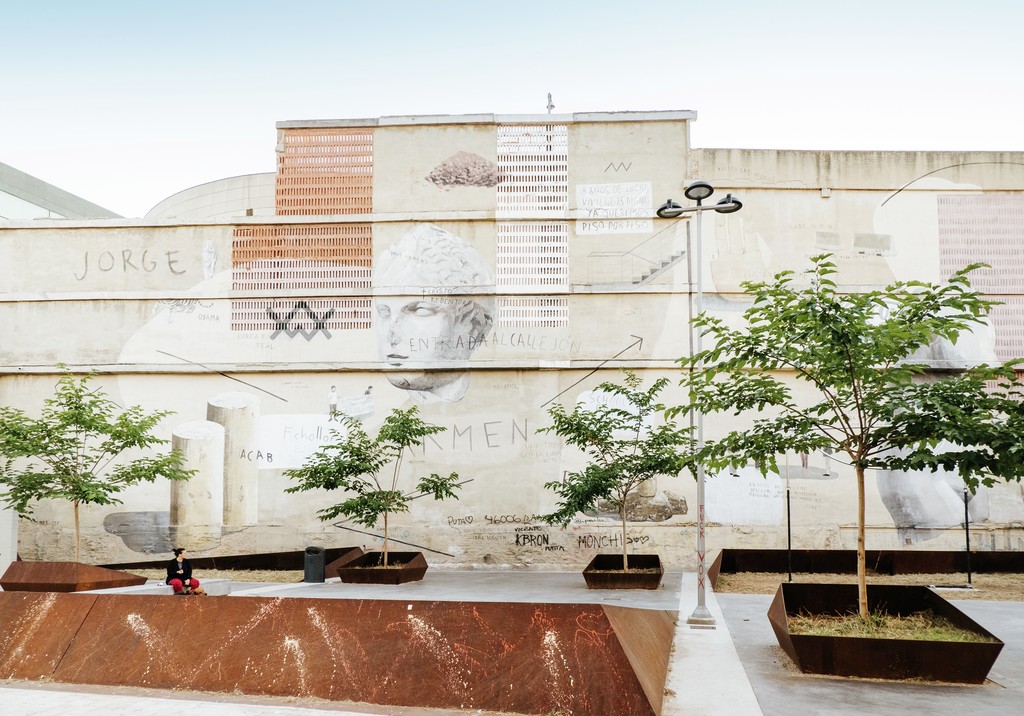 In this small city of artists we have another of the key points where urban art meets one of its ancestors: the Fallas monuments. The Fallas City is the group of industrial buildings where most of the Fallas artists of Valencia meet, and Pichi Avo, the creators of the enormous mural that we can find in this part of the Benicalap district, came here precisely to create a Fallas in 2018. They were the second urban artists, after Okuda, who had the honour of designing the falla that would occupy the Town Hall square that year during the Fallas festival.

The Valencian graffiti duo (they themselves continue to claim the graffiti as such) left their mark on what is probably the largest wall ever built in the city, although we would have to measure the IVAM’s well to know exactly which one holds this title. 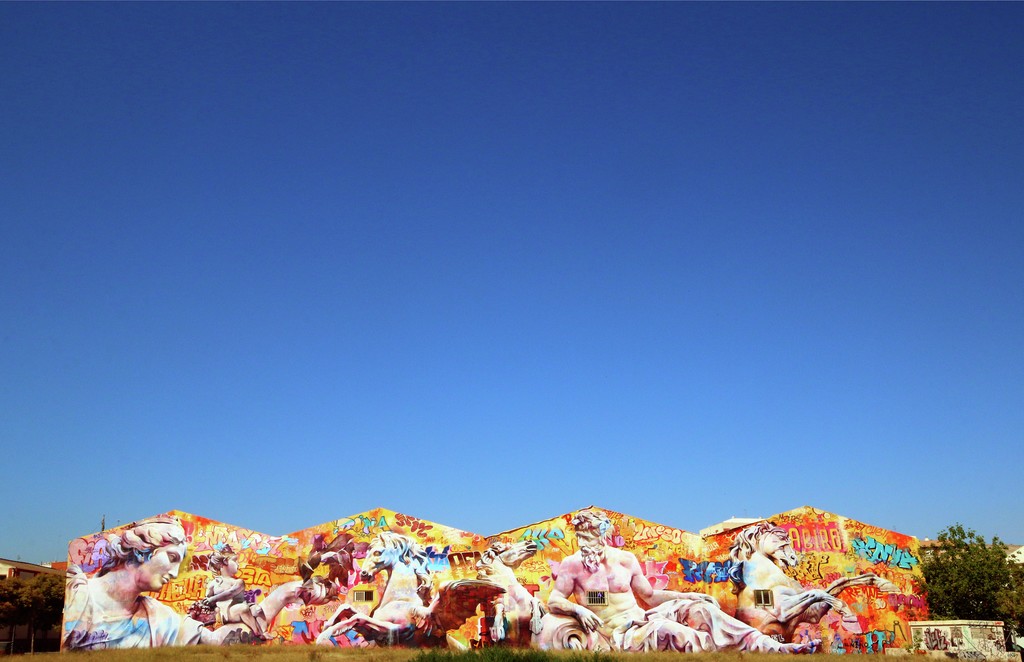 The Marina of Valencia

There are several interventions that you can find in different supports in La Marina, from walls to a retired boat, but there is one that is particularly attractive: the sports court. It was the Catalan artist Abel Iglesias who was responsible for filling this court with colour, so that the different colours go beyond the limits of the game to even bathe the very fences that delimit the space.

Although it seems that it is only used to play basketball or indoor football, right now it is one of the most special places to sit and sunbathe by the sea. Moreover, if you capture this court from a slightly higher point or looking at the beach from one of its sides, you are guaranteed success on Instagram. 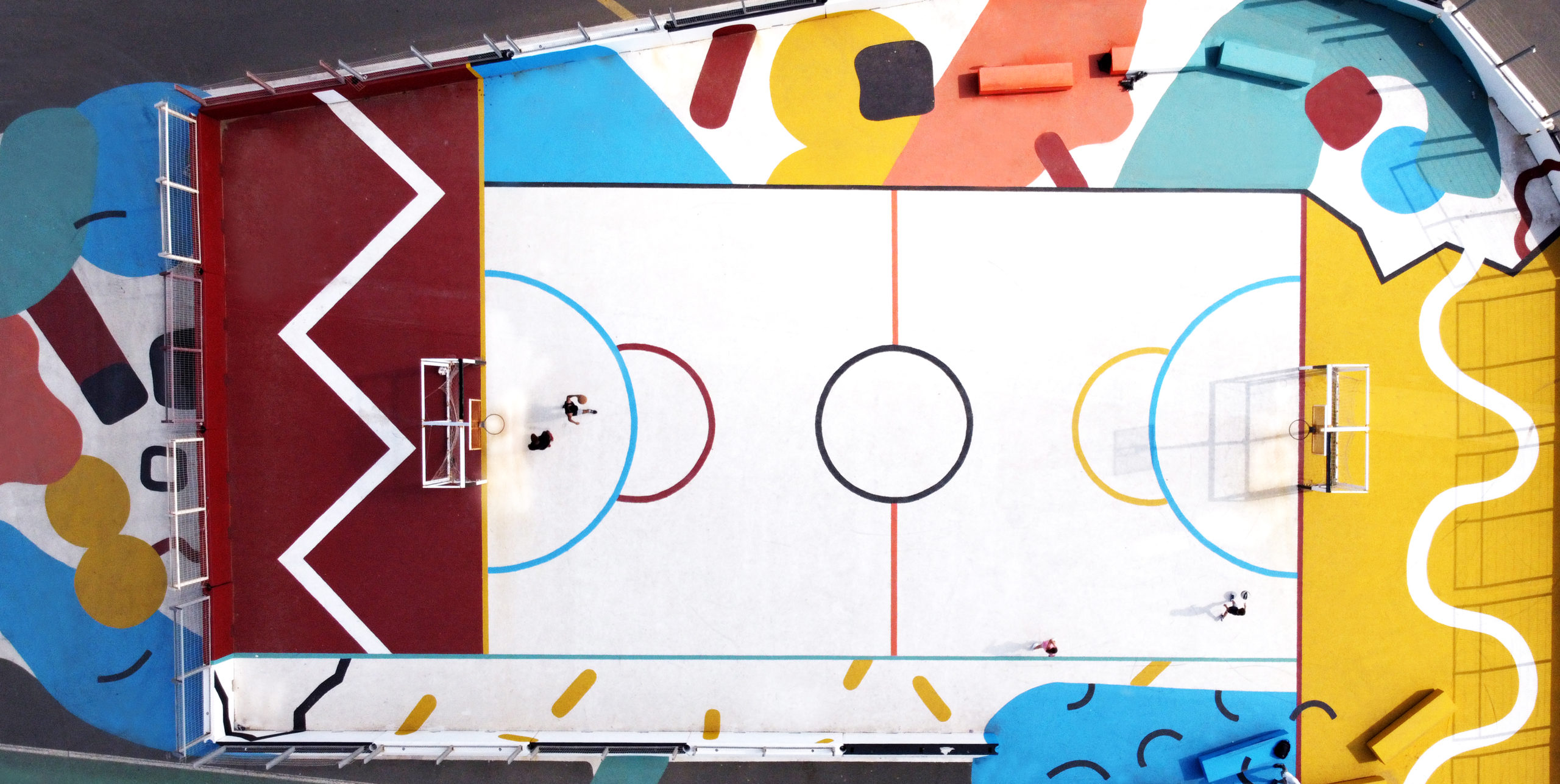 This boundary of La Marina de València, which is the border between the city and the open Mediterranean, is a magical place in itself. It offers very special sunsets if you look towards the city and wait for the sun to stop reflecting completely on the waters of the port. But the proposal of the local artist Luce turns this city boundary into an even more magical place.

Luce’s proposals have more to do with the use of words or calligraphy than with painting as such. On this occasion he used the columns of the boardwalk as lines to write some verses written by a person very special to him: his grandmother Maruja. The verses, which talk about the sea, were transcribed just as the lady wrote them. 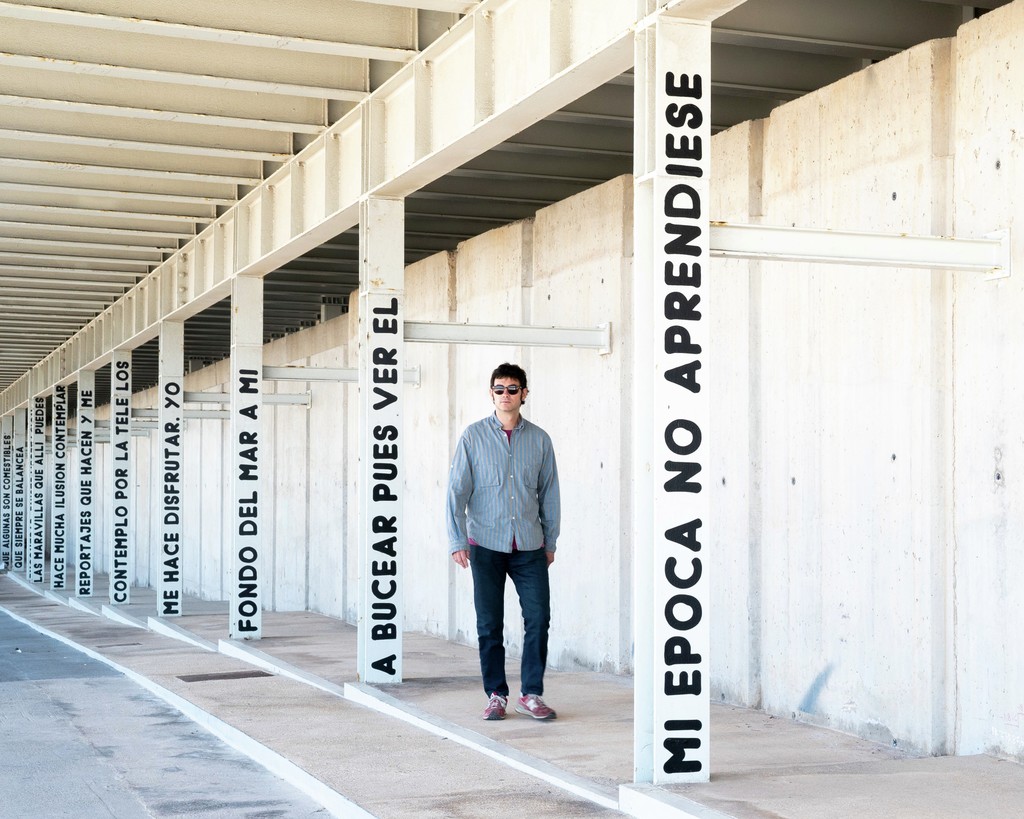 When you have crossed all these destinations off your list, you can take the opportunity to embark on a new artistic route, but this time with air conditioning.